In the history of Hollywood product, the 1930s remains a favorite of mine.  The breadth of pictures is astonishing:  Delicious, naughty pre-coders like "Female" and "Baby Face", terrific and beautifully made series like "The Thin Man" and "Tarzan", screwball gems like "My Man Godfrey" and "It Happened One Night" and full costume spectacles like "Marie Antoinette" and "Gone With The Wind".

In case you'd like to know, here is a list of Top Ten Worldwide Box Office hits for the decade:

In the film family ancestory "Ingagi" is sort of like that crazy uncle of yours a few generations back that you'd rather not talk about.  But talk about it we shall, and it goes a little somethin' like this.....

Filmed in 1930 by Congo Pictures, this documentary* depicts a safari* into the Belgian Congo made by Sir Hubert Winstead*, a Briton, and his American counterpart Capt. Daniel Swayne*.  Their quest?  A little known tribe of Ape Worshippers who reportedly offer their tribeswomen as sexual sacrifices to the Apes*.  While enroute, they come upon a fascinating, and heretofore unknown, reptile species called the tortadillo*.  Horrified viewers also watched while a camera man was mauled to death by a wild lion*.

Once arrived on the tribe's land they were shown pygmies and the hairy little children* that were the products of the interspecies couplings*.  At the climax, a nude tribes woman is being carried away by a large ape* and our white heroes kill the beast and save the girl.  A group of other naked women encircle the dead beast in mourning while the cameras cranked away.

The title, Ingagi, is an African word for Gorilla*. 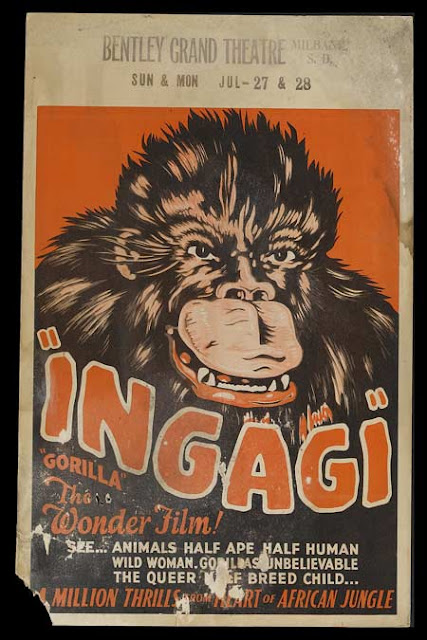 By now, I should think, you're a little curious (and annoyed) by my liberal use of asterisks.  Well, I placed them after each word or statement about the picture that was faked, a lie.  The scam started to unravel at a screening here in Hollywood, when several members of the audience recognized the victimized African girl as an African American girl from Central Casting who did a lot of extra work.

By the time the Hays Office launched a full scale investigation, an embarrassed RKO dropped it's original distribution deal with Gongo Pictures.  The picture was banned from being shown in any major theater chain (a boon for indie houses, tent shows and the like).

What the investigation uncovered was:

* the persons of Winstead and Swayne were unkown to exist.

* this was no documentary.  The African footage had been lifted from an actual 1915 documentary, Lady Mackenzie's "Heart of Africa," and the rest was filmed at the Selig Zoo here in LA.

* there was no such God Of The Apes tribe.

* the 'tortadillo' was actually a turtle with scales, wings and a tail glued on.

* both the pygmies and the gorilla children were play by local black kids between the ages of 5 and 10 years old.

* the star gorilla was a guy in a monkey suit.

* the word 'ingangi' is not known to exist in any of the African languages.

Out of gulibility in the beginning and titilated curiosity later, people flocked to see the picture wherever it showed giving it a final estimated gross of over 4 million dollars! 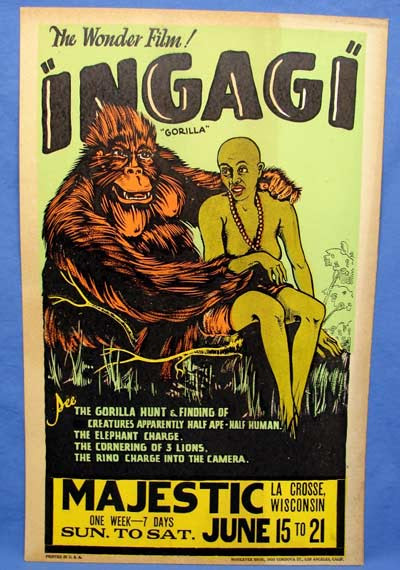 One has to wonder though, just how embarrassed RKO was, considering they went with the whole Big-Ape-With-Girl-In-Peril just a couple of years later! 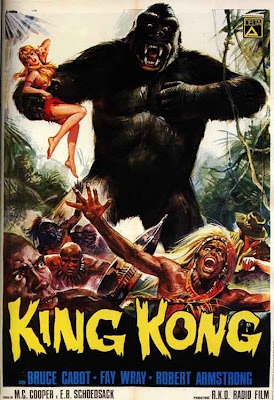 Posted by Philip Mershon at 3:00 PM

though i don't recall the details, this brings to mind the time i watched "nanook of the north" in a film class and laughed & laughed. classmates were puzzled by my outbursts (a common occurrence) as i watched all these things occur. (i was older than the rest of them, already quite jaded and they were very naive.) the film was presented as a documentary, but it was obviously scripted & choreographed). i never heard of this one felix, once again you've enlightened the clueless.....thank you.

I want to see it for the queer half breed child.

Oh my GOD! This would be a Bad Movie Night bonanza!

you are all things hollywood, sugarpie! i've never heard of this "documentary" either, so hat tip to you! maybe you can answer a question that's been bothering me for ages! i wish i'd had more time when i out was on the left coast. maybe net time...xoxoxox

This is a little bit of film history that I didn't know. Thank you, Felix!

I didn't understand the reference then, but while making love once, the guy yelled- "give it to me hard, you big Ingagi!"