I Will Gladly Pay You Tuesday For A Hamburger Today...... 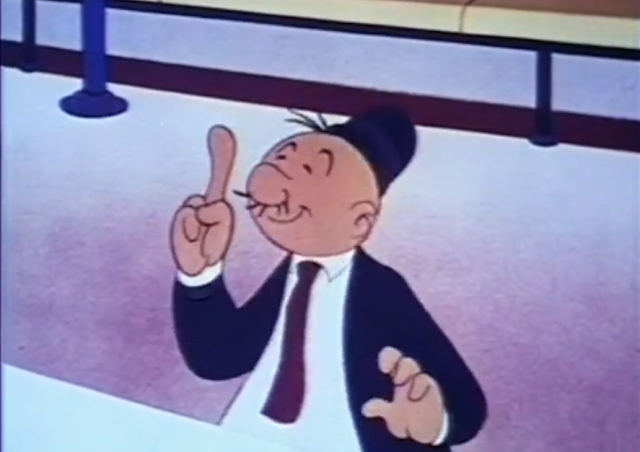 Why, you may ask, am I quoting the great J. Wellington Wimpy?  Well kiddies, it's because I'm hear to talk about hamburgers.....sort of.


But first, a confession.  It is possible to live in a land like Hollywood and, even though a fiend for the history of the place, let certain historical landmarks slip through the fingers.  So my confession:  I've never been to the legendary Barney's Beanery.....until yesterday.

What a fool I've been and why, oh why, have I waited so long!  Maybe it was a hangover of feelings regarding 'the infamous sign' (though that was taken down before I even moved to town), but I'd like to think I'm not that shallow.


And besides, the story goes, Barney put up the sign in the late 40s to appease the LA Sheriff's Dept. and the Alcohol Beverage Control Board who where cracking down on certain 'behaviors' that were happening in certain restrooms of certain establishments all around town.  As there was a gay clientele that frequented the place between then and the mid 80s when the sign was removed, it's clear that nobody paid much attention to the thing.

What folks did pay attention to was great comfort food and drinks served up in an atmosphere of democracy that allowed no more special treatment to Lana Turner than was given to a local milk man.  Here (now as then) all customers are customers; and customers are king.

Okay, now that we've gotten the stupid sign thing out of the way, let's get into the wonders of this burger stand/road house/gin joint/billiard parlor/rock and roll paradise.  This calamitous cacophony of color!


I was invited over by Barney's very own Historian (and part owner), Sheri Hellard.  Sheri and longtime server Dominique Kadison were my guides through this magical history tour.


The first thing I was shown was the endless collection of license plates over the bar. 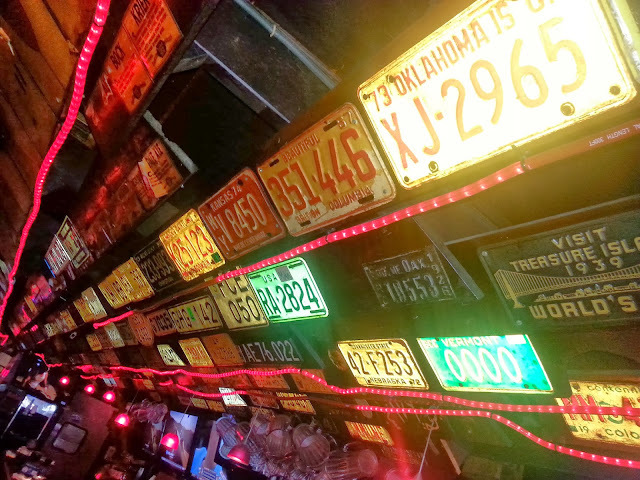 Back when this place opened in 1927, it was on the last leg of Route 66 and folks who were seeking a new and better life in the golden west began to rip the plate off their flivver and give 'em to Barney, symbolically claiming their arrival.  The gesture has continued over the years.

Along about this point of my visit, lunch was ordered.  Here's a little tip:  arrive hungry.  There are over 1000 items on the menu and you anti-gluten and anti-meat types will be just as satisfyingly stuffed as the rest of us.

For me, double cheeseburger with fries and a small side of chili please. 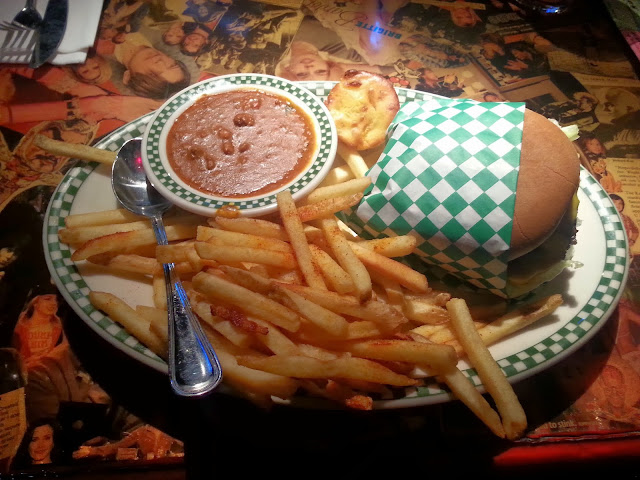 In this world of 're-imagined classics' it's really nice to scarf a plate of chow that tastes the same as it would have when it was made in the 30s!

I'm not going to go into a long accounting of the history of Barney's because I couldn't write anything better than Domenic Priore.  His article is on Barney's own website here, but I will share a couple of my favorite things from the place.  And I will also tell you that I'll be going back because, even though I was there for 90 minutes, I think I saw about 6% of what there is to see. 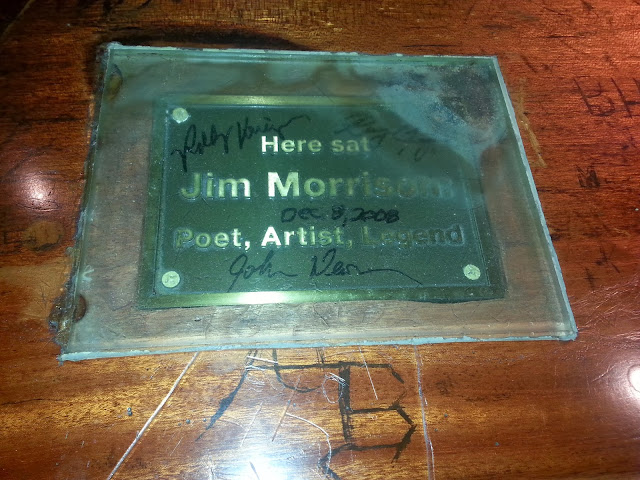 The 'here sat Morrison' plaque on the bar tells only half of the story.  Jim left more DNA than just sweaty palm prints.  One night, in what I'm sure was performance art, Morrison relieved himself of the last half-dozen drinks on this spot.  Yes, The Lizard King peed on the top of the bar.


Favorite thing No. 2:  The not-quite-all-seeing-eye 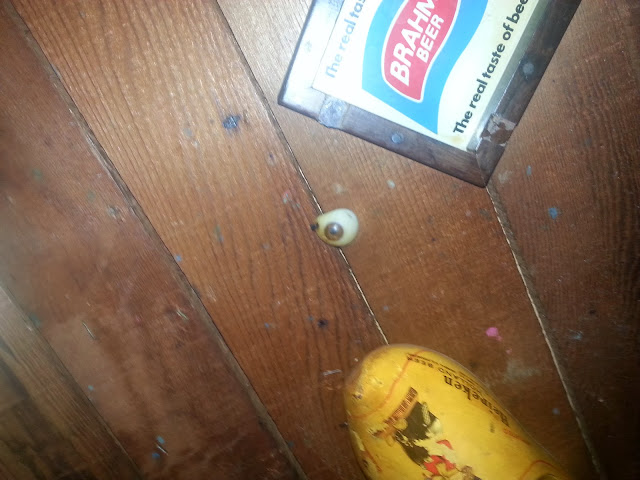 Yup, it's an eyeball.  And, yes, it's nailed to the ceiling over one of the pool tables where, as legend has it, it was surrendered to the victor of a pool game when it was discovered that the One-Eyed Jack, didn't have enough jack to payoff the bet he'd just lost. 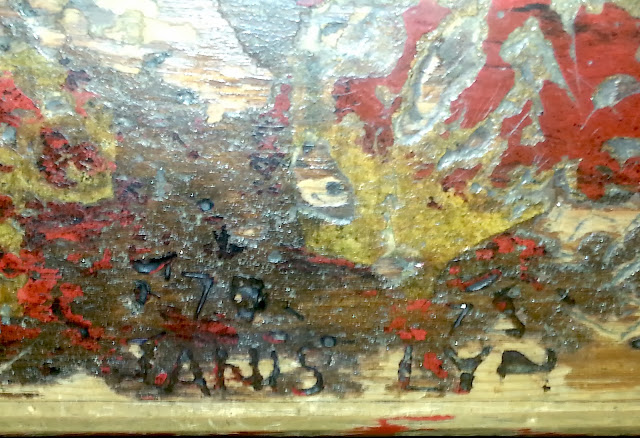 Once again, direct your eyes to the heavens.  Nailed to the ceiling to protect it from any further molestation is a former tabletop where is carved, "Janis Lyn 70"!  Anyone who knows me knows that Joplin has always been my forever number one.  And on the evening of Oct 3rd, 1970, Barney's was her last stop before boarding the train bound to Fabulon at the Landmark Hotel.

One last thing.  All things being in cosmic synchronicity in a place like Hollywood, at the same moment I was snapping the above picture, Janis Lyn Joplin was posthumously receiving her star on the Hollywood Walk of Fame. 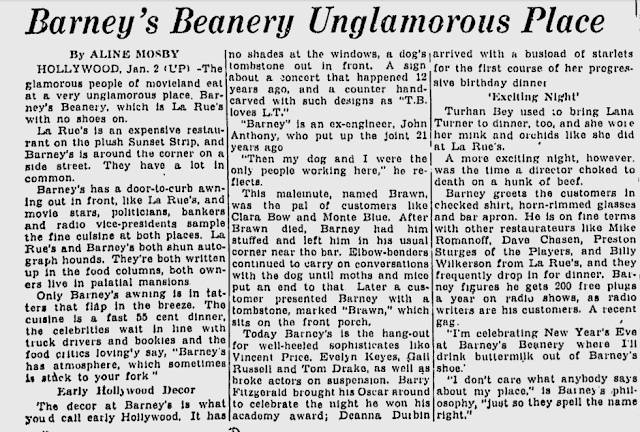 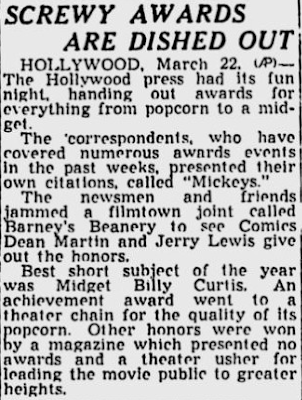 Posted by Philip Mershon at 2:29 PM

I've always wondered about that joint. Now you make me wanna go!

Hi, I just wanted to let you know I reprinted your post on http://www.jimmorrisonproject.com/entry/2013/11/i-will-gladly-pay-you-tuesday-for-a-hamburger-today

Martin, plan on it.

Very neat reading (and seeing!) Thanks!

This is really too good. I am going to try this. Thanks for sharing nice post... Star Celebrity Pictures